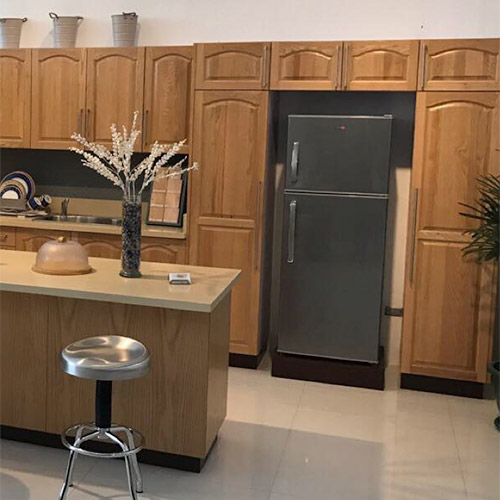 MERLGEN’s solid oak doors are made with imported wood from Canadian red oak trees. Red oak (Quercus rubra and Quercus falcata of the family Fagaceae) is the most plentiful species of oak in Canada, especially in the eastern part of the country. Its range extends beyond Canada, throughout the United States, further south into Mexico and Central America, and can be found as far away as Europe and even Iran where it’s known as Persian oak.

According to the USDA’s handbook, Mexico has more than 100 species, Guatemala has around 25 species, and Colombia only has 2 species of red oak. The wood from the various tropical oak species is in most cases heavier than the species in the United States, but it is rarely used for cabinets or furniture due to difficulties encountered in drying of wood.

During the early 18th century, red oak was introduced to Europe (namely, England and France) and “today there are many fine buildings of this oak in France, Belgium and Germany,” according to “Know Your Woods”. In Europe, young trees grow around 8 inches per year and even faster in Canada.

Other Common Names for Red Oak

Werner Lorenz, owner and president of Indiana Veneers Corp. (Indianapolis, IN), says that white oak, which is often touted as “better in overall properties” than red oak, is more popular in international markets, but that red oak is still preferred in the American market possibly due to price, since “white oaks tend to run 10 to 20 percent higher in price than red oaks.” While white oak is frequently used for cooperage because of the tight pores, red oak is not considered suitable for tight cooperage. According to Lorenz, red oak is probably third most popular of all species behind cherry and maple in the United States. “Supplies of red oak are abundant. It remains very popular for kitchen cabinetry and furniture, especially for Mission and Arts and Craft style furniture,” Lorenz says.

We are a family-owned manufacturing company that crafts modern yet affordable cabinets, wardrobes, and closets customized for any space in your home. Having built a reputation for exceptional quality and service, we serve the entire country with manufacturing plants and showrooms across the Philippines.

Simplicity, Flexibility and Elegance at a Very Affordable Price

MERLGEN Euro Designs offers high-end craftsmanship of modern cabinets, wardrobes, and closets for any space in your home at affordable prices accessible to all Filipinos. Proudly serving the entire country with locations across the Philippines, we're dedicated to providing you with peace of mind through the entire process from customized cabinetry design to efficient construction and installation.

We are proud to be 100% Filipino with locations to serve you across the country.

Fill out the form below for a free consultation and start your dream kitchen or wardrobe today!